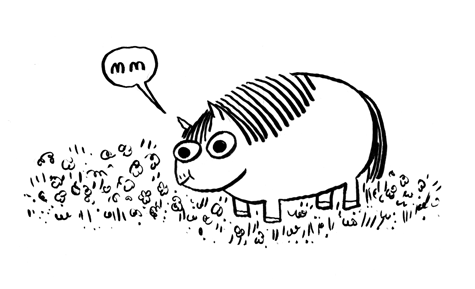 I'm going to try this, I think. I haven't been updating the lj, because I don't like seeing people link to it instead of my website (which is still my home base and main source of comics-related income!). But then I didn't want to leave it either, so I think I can work the lj like the tumblr and just post a leading image. Just a little change, no big deal! With the site, twitter, tumblr and lj I feel like things are all over the place, and I'd like to keep things as tight (but accessible!) as I can. 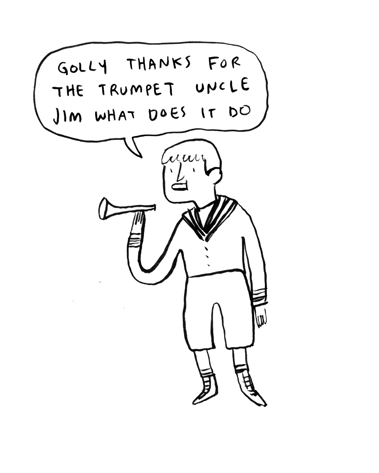 I made a comic for my mother yesterday, who has believed in my abilities longer and more fiercely than anyone else. You can find it here.

You can find them here on my tumblr. It's part one of two, and hopefully there's a word to the wise in there at least once.

I have been obsessing over Medieval history in the past while. It only seemed natural to come back to the world of our old friends. I like the idea of recurring characters in this strip, and that's why you're seeing more of it! Though we might take them from 15th century to 14th century. The 14th century is just so.. gloriously Medieval.

I like a good old mix of funny history with a lil' anachronism thrown in the mix. For allergies, I'll be honest: I have no idea what people thought then. And I've been looking at medical Medieval image catalogues like nobody's business. I should really make a tumblr or something to record research travels on the internet, because I just want to share everything with you! There is so much great stuff out there! We'll see. But anyway, back on track re: allergies-

Weren't we talking about Middle Ages stuff? Well, read all about it in my new book, How to write jokes about topics that are unrelated.

And for heaven's sake, watch Terry Jones' Medieval Lives and do it now- you won't find a more charming, intelligent host anywhere. Terry, if you're reading this (you're not, but just in case you are), you're the best.

While looking though The Boston Public Library's Flickr account, I found this picture, and decided to share with you all the reasons I find it funny. Just for fun. I see a lot of these sorts of pictures! Everything is symbolic sure, but let's do this anyway.

OK:
The title is "News from America, or the patriots in the dumps", so if you were wondering how old the phrase "in the dumps" is, the answer is At Least 1776 Old.

The summary reads, "Lord North shows a letter from General Howe, whose victory at Long Island had just recently been announced. A dowdy, bare-breasted woman with a liberty cap falls down weeping and American ships sink in the background."

Who is this jolly fellow?? Why it's the Prime Minister, Lord Frederick North. He certainly looks a lot more jovial here than in his glum official portrait-

Though perhaps that was painted after his side had lost the Revolution.

Speaking of Prime Ministers, yes, we are in Britain! That is where this cartoon is taking place. The Brits have won a victory at Long Island and everyone has shown up at the Vague Town Steps to hear the news. And by everyone, of course I mean:

A bunch of Americans! Yes, they took a wrong turn at Albuquerque and ended up on an English beach (damn this wartime geographic confusion!) just in time to have their noses shoved in the latest reports by the Prime Minister himself. Ho ho! They are displeased!

This person is especially displeased.

And what's this? Lady Liberty herself, sitting on the ground, tits out, weeping, too sad to even blow on her vuvuzela (remember those?). God it's like my prom all over again! But don't be too sad, American Liberty Woman, as Delacroix immortalized years later, if you're going to fight for Liberty, tits out is the way to go.

But let's look at the British folks gathered for the news.

Is that the king in the upper right corner? He's got that fishy-face weak-chinned Georgian King look. He's not gloating as much as the rest, he just bumped into everyone on his morning stroll. But here is what cannot be missed-

When, when is this gesture coming back as a big Fuck You? If someone did that to me I'd be confused but also sort of angry, like I know it's a dickish thing to gesture even though it's completely ridiculous.

And in the background, naturally,

A bunch of American ships are, first of all, there (what?) and second of all, sinking. Probably because they were foolish enough to sail to England! But also possibly because of those icebergs.

Are you an aspiring comic creator?

It's been a very good year for me and comics. To celebrate, and to give a little back, I thought I would take on questions from people who are trying to make it in the world of webcomics. If there's one thing I really understand, it's that this business can be confusing- knowing what to do and how to do it. I asked a lot of questions when I started, that's for sure.

Running a comic is different for everyone, and I can only really speak from my own experience, but hopefully I'll have something worth telling by this point.

If you have anything you'd like to ask, write to this address: beatonna at gmail dot com. Put the subject as 'webcomics'!

I'll take the most commonly asked questions and answer them after a while in a new post. Don't ask me to look through your comics send a link to your site, I'm not going to look through anyone's website (stressful). This is more of a for-everyone thing. Your questions, of course, will be about you and for you and that's fine! But ask in a way that will be useful for more people, so we can all get in on the fun.

I'll be as honest as I can!

Just playing around with drawing pictures.

The greatest thing about the invention of the bicycle and ladies starting to ride them is: everything. The clothes! The bikes! The attitude! But perhaps especially: the scads of satirical cartoons made at the time that were supposed to make women look shocking and inappropriate but just makes them look super stylish and badass instead. I just can't get over the cigarette in the cartoon I used though, and the splayed legs as she rumbles willy-nilly down the street. God, is there anything better than cartoons?

Incidentally, 'velocipedestrienne,' not a word I made up. You're looking for page 89 of this very informative contemporary read. I enjoyed the chapter very much. You would not believe how many words they manage to birth out of the word 'velocipede' in that book. If you notice the date you'll see that I stuck a phonograph in the cartoon about ten years too early and well that is just because I can do what I like around here.

I'm headed home! Here are some holiday drawings before I go. Ken in the Nativity Scene is there just because I remember both owning Hollywood Ken (he had stars on his pants and the word HOLLYWOOD on his t-shirt) and trying to play with the figures in Mom's Nativity scene. I mean let's face it: they're dolls right? Amirite. The problem was that they were all puny next to the Barbies and that is a problem, because no doubt Mary would consider a man-about-town like Hollywood Ken to be the foster father of her miracle child, but she only went up to his hip, so Joseph was a more reasonable choice in the end.

As for Hunks, you may remember this twitter comic I made about meeting my neighbours:

I had to make a comic out of it in some way right! Here are some things that will always be funny to me:
butts
hunks and babes
people lying on the floor
top gun

And that is the secret to anything I have ever made.

Will you be in New York between Christmas and New Years?

Then come to the third Crime Stoppers Club, a show put on by Michael Kupperman and myself, this month featuring the great talents of Julia Wertz, Anthony Devito, Mitch Magee, Julie Klausner and MARK TWAIN!

That's December 27th, at Luca Lounge in the East Village! Clicka that link hey why not

Oh one more thing - if you're back in Cape Breton for Christmas like me, I'm going to do a little signing or meet and greet sort of thing on Boxing Day in my hometown, Mabou. It's at the museum - An Drochaid, the Gaelic and Historical Society building - at 7:30pm. Be sure to drop by and say hello before the dance starts, hmm?
Collapse